Most people today have a scanner because it came with their printer. While this can be useful for quick copies of documents, it might not do for archival quality scans of photographs, slides or negatives. Some high-end printers may serve, but the best option is to get a dedicated scanner if you plan to scan many photos. That does not mean that it has to be expensive.

The point is that you need a scanner which was designed to scan as it's primary purpose. Such scanners can come with a detachable lid, in case you want to scan from a bulky item like a book. Some may have slide or negative attachments which, as the name suggests, allows you to scan 2 x 2 inch slides, or negative strips. Although you may not have slides, you will certainly have negatives. Negatives deteriorate over time, though not usually as fast as slides do.

Scanning your negatives is the best way to preserve them. The scans of a negative can also be converted to positive images at the time of scanning, giving you the same end result as scanning a photo or slide. If you have the negative to a photo which is in bad shape, your best option may be to scan the negative to a positive instead of scanning the picture.

The images which are displayed on your computer screen are made up of tiny colored dots, just as they are on your TV. The more dots per inch, the higher the resolution, and the better looking the image. The scanner converts your picture, slide or negative into the tiny dots, but it needs to know how many dots per inch (DPI) you want to have. The higher number of DPI, the sharper the image will appear on your computer screen, or in a print of the image. So we want he hightest number of dots, of course!

Well, not so fast. More dots per inch means a larger file size on our computer. We could scan at such a high resolution (high DPI) that the resulting image file would be too large. One large file would not be a problem, but hundreds or thousands would add up. So how large is large enough? That is really a question of preference, but as a start, you might consider at least 600 dpi for scanning a photograph, and 2400 dpi for scanning slides and negatives. Most images on your computer screen are at 72 dpi, but that is too low for archival scans.

The real concern that we have with DPI is that it be large enough to give good quality prints. For 8x10 prints, we need at least 300 DPI. Another concern is that our photos retain the nuances of color, and higher DPI is important for that. But perhaps the greatest concern is that if later on we decide to print only a portion of the picture, the result will be disappointing if the DPI is too low. That is what happens if you blow up a picture too much; you lose detail. So scanning at high DPI gives you an over-large photo, but it also allows cropping later on with good results. An image scanned at 600 DPI will give a better 8x10 than an image scanned at 300 DPI, and will allow for a portion of the scan to be printed at 8x10 without losing as much quality as you would with 300 DPI.

To crop or not to crop 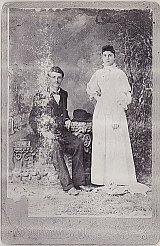 Should you remove unwanted areas of your photograph as you scan? Most scanners will allow you to select a portion of the photo to scan, leaving the rest "on the cutting room floor." I don't think that there is a one size fits all answer to this question. A photograph can have a character all of its own, exclusive of the actual content. Worn edges, scratches and blemishes all contribute to the character of the photo. I try to err on the side of caution in this regard. I'll never forget running afoul of my beloved Aunt Novella. I was copying a photo for her, and I cropped it. She was nice but firm, I had left out the most important part of the picture. Yes, it was Grandma Floy's first wedding photo, and I had cut out her shoes showing from under her long skirt.

I have "cleaned up" many photos after scanning them, removing dust spots and the like. And I have "repaired" photos, removing scratches and holes in the photos. My rule of thumb is to remove any imperfection caused by the scanning itself. Dust is the main culprit, either on the glass of the scanner, or on the surface of the photo or slide. And I will try to repair a scratch or "hole" in a photo if it is on a face or other important part of the photo, and as long as it doesn't detract from the "character" of the photo.